I was going to be an art major in college, but I couldn’t get into a drawing class my first semester so I took creative writing instead. Those are the only two interests I’ve ever really had – and not so much on the art side. I like painting and drawing, have a modest ability in recreating objects (but not people – except in cartoon form) but any inspiration, any ability to paint with meaning, left me a long time ago.  I’m ok with that.

I wouldn’t have been a successful art major, because it turned out I didn’t like art history. My lowest grade in college was an Asian art history class. I thought we’d be studying sculptures of people "doing it," but it was mostly about how to distinguish different Buddhas depending on his hat style and hand position. The instructor pronounced the Himalayan mountains  “Hee-mall-yawn”. That may be the correct pronunciation, but I found it distracting and that’s all I remember about the class. I also remember crying all through the final because my best friend was having emergency life-saving surgery at that exact moment and I knew I was failing the exam. The painting of a mandala I did for extra credit, which kept me from failing the class completely, now hangs in my mom’s office. Upside down. She’s worse at interpreting Asian art than I am.

Anyway, I took creative writing instead and those were pretty much the only classes I got A’s in, and definitely the only time I felt confident in college. Or ever again.  I had no idea what I was going to do with it, or even if I wanted to pursue an MFA. I used to sit in the Mills College Library, when I worked the 9pm – midnight shift and look up things on the Internet, explore the databases and try to find something that interested me for more than a few minutes.  Or I spent the time I was working writing stories. Occasionally someone would come up to my desk and ask me a question. Annoyed at the interruption, I would smile sweetly and say, “I really have no idea. Why don’t you ask the librarian?” The librarian didn’t work that shift.

I don’t remember the exact moment that I decided to become a librarian. I was still only thinking about it when I realized I could go to Library School in England. But it seemed like it would be a low-stress, quiet job that would give me plenty of time to write. So, of course my very first professional job was the highest-stress, loudest job and required me to sign the Official Secrets Act.

I also got to find out what happens when assistants say, “I don’t know. Ask the librarian.”  In the course of looking up the answers to everyone’s random questions, I’ve learned a little bit about a lot of different things – and I’ve discovered one more thing I like to do: answer questions. Unless I’m writing, in which case I’d rather you didn’t bug me right now. 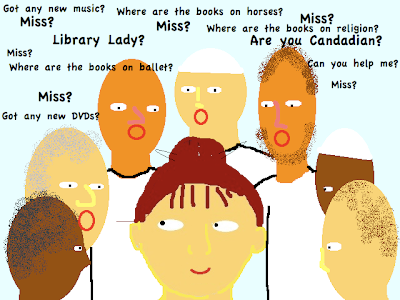 Note to future employers: This, as with most of my essays, is meant to be humorous and should not be taken as a reflection of my work ethic. I was good at my job, and I'll be good at your job.
*This post was originally published at The Daily Theme on November 2, 2010
Posted by Megan at 9:56 AM