An Apology for Bores

I don’t think I know any boring people. Sometimes I am bored by what interests other people, but that’s not the same thing. I don’t hold it against them. It bothers me when people don’t get to the point fast enough—when they are more concerned with accuracy than telling a good story:

“Six years ago… or was it 5? Bush’s first term it was, so that must make it… Junior was still in college so …” That makes me crazy. I’d rather tell a good story and sacrifice any semblance of accuracy. I believe the technical term for this habit is exaggeration.

Anyway, I had a prisoner who worked for me who told the longest winded stories ever and it was a real chore not to completely zone out. Sometimes he would tell the entire plot of a TV show, and it would take longer to listen to him than to watch it live. I could always tell when he was gearing up for a long one when he would lean against the counter, take off his glasses and run his fingers through his cropped short hair.
“Well, Megan, did you uh happen to catch last night’s episode of True Blood on BBC One?
“No Joe. I don’t have a TV.”
“Oh that’s right you told me that before. Don’t know why I can’t remember. But you are familiar with the show?”
“Yes.” This is the fatal mistake. 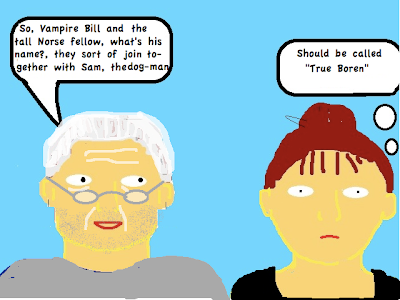 We always let him talk though because he didn’t fit well into the prison. He was older than most of the other inmates, but only recently been convicted. His wife had killed herself and his children did not visit him, and in an alcoholic black-out he beat to death his 87 year old neighbor who had refused to loan him money.

I once overheard him discussing his crime with the other orderlies who worked in the library – the only time he didn’t go into detail. “I can’t remember doing it, but the evidence was there. It must have been me.”

Most of the time people get bored because they do not understand the details, and the topic does not inspire their imagination. Sometimes the language gets in the way; the jargon can be distracting. I don’t understand the language of geneology, which is why its sometimes hard for me to get excited about 9th great-grandfathers. I’m never sure how related we are. In England, I didn’t have a TV so I was never able to participate in the daily recaps of popular shows with my colleagues. Instead, we found other things to talk about, like books and movies, and the prisoners we served.

Sometimes its hard for me to talk about my job, because librarianship does not seem like an interesting occupation. For many incarcerated people, prison is their first experience with libraries. That’s why it was so important to be friendly and welcoming and professional.  Most people’s opinions on librarianship have been shaped by their experience as a patron, and whether or not the staff were helpful. In many libraries, it is often impossible to distinguish the librarians from the assistants,and from the pages and volunteers;  a library is judged by the quality of its customer service as much as its resources. This makes sense, but it limits the general public’s awareness of the variety of duties and the skills required to perform them. Mention a cataloging problem to anyone but a librarian and it’s like hitting a snooze button. I try to get around this problem by reeling my audience in with a prison anecdote and then I hit them with the library.

Email ThisBlogThis!Share to TwitterShare to FacebookShare to Pinterest
Labels: Prison