I’ve never doubted that leaving my job in the prison was the right choice, even though it meant leaving England too.  I had dinner with a friend last night and he asked me what it was about that country I loved so much and as many times as I’ve been asked that question, I’ve never been able to answer.  I have no words for it, but it was there in every breath I took, every rainy day, every blade of grass and overgrown ivy and thatched roof and winding one lane road. It was the only place I never felt like a stranger even when I didn’t know a single person. 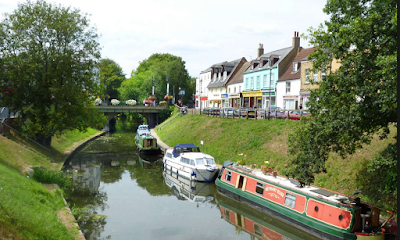 Even when I was scared and so darkly, deeply unhappy, I felt at home there. Even after five years, it still strikes me as incredibly unfair that everything I loved about that place and everything that was wrong were so entwined that I had to give up one in order to escape the other.
***

It’s impossible for me to think of the last time I left the prison without remembering the first time I went in.  That first day was in April 2006, and I was there to interview for the position of Library Manager.  I set my bag in a tub on a conveyer belt that fed into an x-ray machine, and I stepped through metal detectors. I stood with my arms out while a woman in a uniform ran her hands down my sides, around my back, across my stomach and down my legs. I stiffened and she told me if I got the job this routine would eventually feel normal. She was right, but getting used something isn’t the same as being comfortable.

After passing through a set of double sliding doors, I was met by an officer who worked in the library. He gave me a tour of the prison, and because it was lunchtime and the inmates were locked up, he took me everywhere --  through the workshops, the healthcare center, onto one of the wings. He even locked me in an empty cell in the segregation unit because I had arrived so early for the interview, he didn’t know what else to do with me. He was patient and answered all my questions, and when I told him I was used to criminals because my dad was a lawyer, he didn’t shake his head or call me naive. After I got the job, he would often do both of those things. 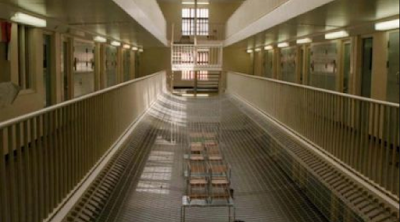 I don’t remember going in the last time, but I remember every step I took on the way out.  I remember looking at the clock. And then Jane, the officer I hired to work in the library after the first one transferred, said “Let’s go let’s go let’s go.” She wanted me out fast --  too fast to think and get emotional and cause a scene because there was no crying in the library. That’s a rule I broke only twice in the four years I was there, both times early on, before I found other unhealthier ways to cope.

“This is it, then,” I said to Jane. I gathered my stuff and we locked the door to the library. I looked back through the unbreakable wired glass one last time, at the shelves I had picked out from a catalog, and the books and music CDs and DVDs I filled them with, and the light matte blue I’d painted the walls.

When we reached what is known as the sterile area (where the prisoners were not allowed), I paused and said, “Wait. Am I supposed to turn in my ID?” I wish I hadn’t asked that question. I could have taken it with me. What would they have done? I was leaving the country; they wouldn’t have been able to find me. But I said it, so we detoured into the Security Office and I handed in the badge with my picture on it, taken the first week I worked there, when my hair was so short it barely reached my chin.

In the gatehouse, I dropped my keys through a chute, and bent down to speak through the opening. “I’m not coming back,” I said so that the officer on the other side of the thick glass window wouldn’t exchange them for a metal disc imprinted with a corresponding key number, which is what would have happened on any other day.

***
Five years ago today, I walked out of the prison for the last time. I checked my journals from 2010 but I didn’t write that day. The nearest entry is almost a month earlier, after I’d made the decision to leave, but before I understood what I was giving up.  I was unhappy. I’d been unhappy for a long time. My happiness (or lack thereof) is not usually a factor in my writing, but most of my last year there went unrecorded. I’m sorry about that now, but the gaps between entries have as much meaning as the pages I filled before and after. The lost time reminds me that leaving was the right choice.

But even though I didn’t write about that, I remember.

The first set of doors slid open and Jane put her hand on my back to push me through. “Let’s go let’s go let’s go” she said again. I walked through the second sliding doors into the lobby, and then finally through the front door. I thought about the first time again.  Looking up, the twenty-foot walls surrounding the prison seemed to extend forever in each direction.

I wanted to take a moment, but I didn’t know what to do with it.
So I just kept going.