I’m reading a book that I could have written.

I’ve read many books I wish I’d written – books about the college experience and confusion and finding oneself. About prisons and libraries. Books or stories that so perfectly captured what I’d known and felt that, after reading them, writing about those experiences myself would have felt redundant, unnecessary, and I feared, produce a lesser version.

That’s not how I feel this time.

This book is about keeping a diary. I got my first diary when I was 8, and over the next 10 years I wrote about my feelings and thoughts and frustrations off and on in spiral-bound notebooks.

And then I took a writing workshop 15 years ago, the summer before college, and started writing on purpose, keeping track of the words in numbered notebooks I called journals.  Everyone who knows me knows about the journals. I took them to England and brought them back again. 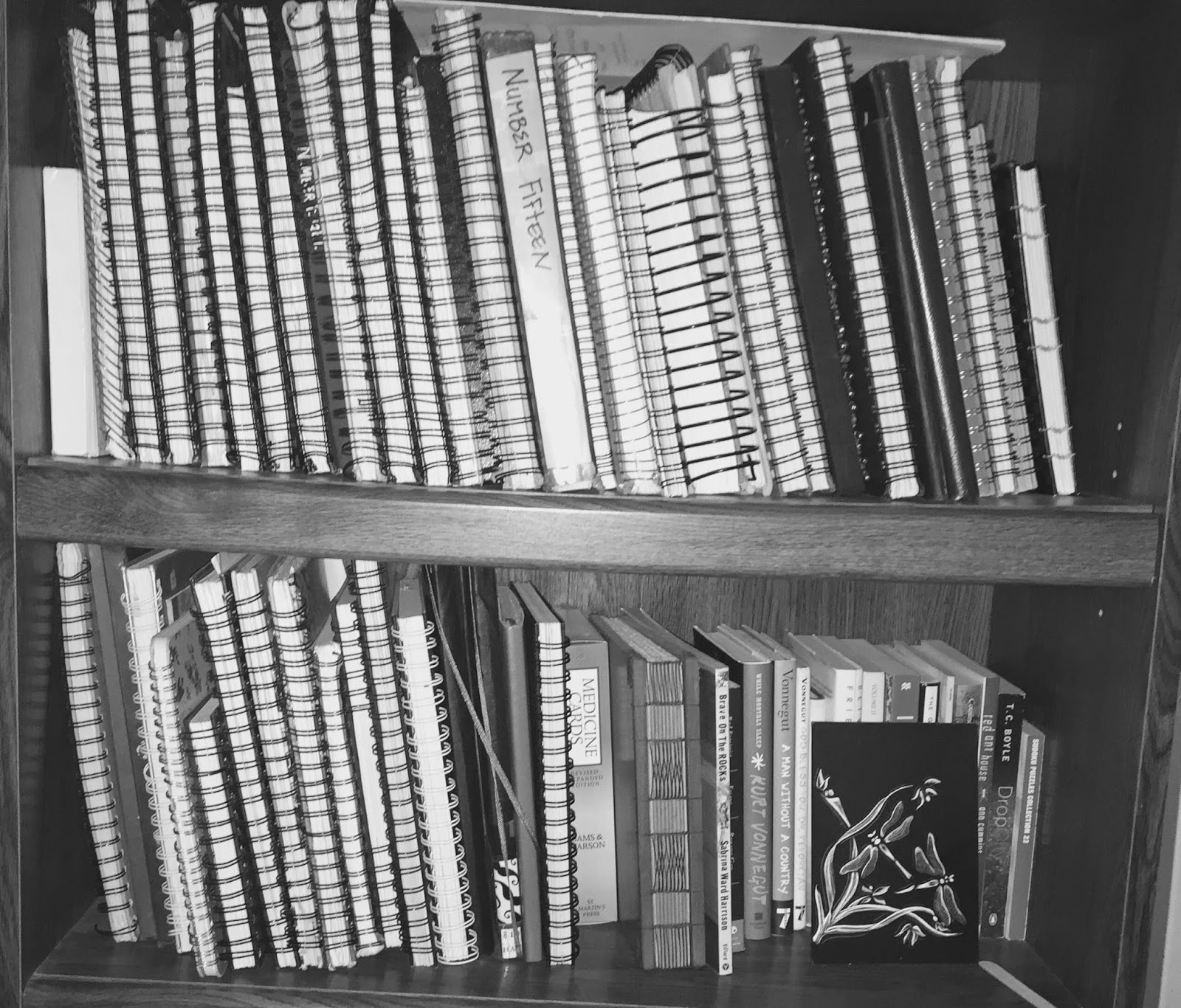 So I’m reading this book about the diary a woman kept over the course of  25 years. From my brief research about her, it’s clear we are very different. She is married, and has children. She has published several memoirs. She is a professional writer.

But this most recent book of hers, I know I wrote it too.  I’m reading her words and I’m writing down in my journal (as I do) the things she says that feel true, and I realize I have to stop after less than 20 pages because every idea, every sentence, is familiar. I have to stop writing out her words because I’m going to transcribe every one.

The book is called Ongoingness: the End of a Diary by Sarah Manguso.

“From the beginning, I knew the diary wasn’t working, but I couldn’t stop writing. I couldn’t think of any other way to avoid getting lost in time” (4).

From the beginning, writing has been a compulsion for me. So many times, I couldn’t sleep without first writing out the day, recording the feelings, reliving them, writing first about what happened, then how I’d reacted, and finally, what I wish I’d done instead. I seem to make a lot of mistakes, some of them over and over, and rereading my journals has only ever confirmed that for me.

“To write a diary is to make a series of choices about what to omit, what to forget” (6).

At first, it was a shock to me to realize I might record an alternate version of an event and then, in rereading it, the written version became the new memory.
I tested it out. I’d change certain details to make a better story, or to cover up the shame, and the altered version always overwrote the memory. It didn’t quite settle – I reread some of these entries and there are clues that it didn’t happen that way. Maybe because they’re too polished for what should have been a first draft.

So, I’d read those entries and know it didn’t actually happen that way … but I still can’t remember the truth. That scared the shit out of me. It meant that not only couldn’t I trust myself to record a true version, I also couldn’t trust my own memories.

So, I stopped writing for a while. There’s a gap in my journals which starts in late 2008, and continues through 2009 where I wrote almost nothing – 17 entries for that entire year -- and only really picks up again after I left England and moved back to Arizona. But without that record, fabricated or not, I remember almost nothing from that time . Leaving England was the most significant decision I’d made since choosing to move there in the first place, and I have almost no record of it.

I know I was unhappy.
And I stopped writing because I wanted to forget.
But now I can’t remember why I left.

“I’ve met people who consider diary keeping as virtuous as daily exercise or prayer or charity […] They imagine I have willpower or strength of character. It would be harder for me not to write it, I try to explain […] I write the diary instead of taking exercise, performing remunerative work, or volunteering my time to the unlucky. It’s a vice” (10).

When I picked it up again, it was deliberate. I started a writing project with my mother – the Daily Theme blog – and suddenly I was back in the habit of writing almost every day.

And once that happened, the words started spilling out again – most of which were not appropriate or relevant to our project. And when I say not appropriate, I don’t mean salacious or sensational. At that point, I was almost 30, unemployed and living with my parents. Still I was filling pages and pages again, and most of those words weren’t related to the topic of the day – but in order to get to that topic, I had to wade through all the other thoughts first.  And I needed a place to put them.

When I was in college, I remember being very frustrated with a friend who would say, at any given moment, “I should be studying right now.” And I hated that – I hated the idea that we were having a good time and all she could think about was what she should be doing instead. I hate that I have become that person, describing how I waste my time. I write about that a lot.

“Another friend said, I want to write sentences that seem as if no one wrote them. The goal being the creation of a pure delivery system, without the distraction of a style. The goal being a form no one notices, the creation of what seems like pure feeling, not of what seems like a vehicle for a feeling. Language as pure experience, pure memory. I too wanted to achieve that impossible effect” (16).

I too want to achieve that effect. But I don’t know if it’s impossible. When the writing really takes hold, and I stop mouthing the words under my breath as I write them, a direct path seems to form between my brain and the pen  (or the keyboard) and I’m often surprised reading later what I’ve said, because I didn’t know that’s what I thought. Flannery O’Connor said, “I write because I don’t know what I think until I read what I say.”

I write better than I speak. I don’t know if it’s a confidence thing, or the fact that I get distracted by the sound of my voice, or that I’m afraid to see the effect my spoken words have on the listener – because when it comes out wrong, it’s awful. I never share a first draft with a reader, why do I have to speak words without thinking? When something comes out wrong on the paper I can scratch it out, but if I say the wrong words out loud they can’t ever be taken back.

Yet when the words do come out right, when I’ve expressed not just how I feel but how someone else might feel, and if someone reads these words and understands … then it doesn’t feel like a waste of time anymore. When I’ve spent more time revising the words than the time it took to write them, it doesn’t ever feel like a waste.

I’ve reread, reworked, and rearranged these particular words over and over. This is not my journal, but it feels like I’ve been writing this piece for 15 (or 25) years.

And that book I’m reading doesn’t quote a single line from her diary. The journals and diaries are just notes on life for us (the writers) alone. When we share our words with anyone else, we choose those words on purpose, for a reason, and with care.

“The only thing I ever wrote that wasn’t for an audience was the diary” (94). 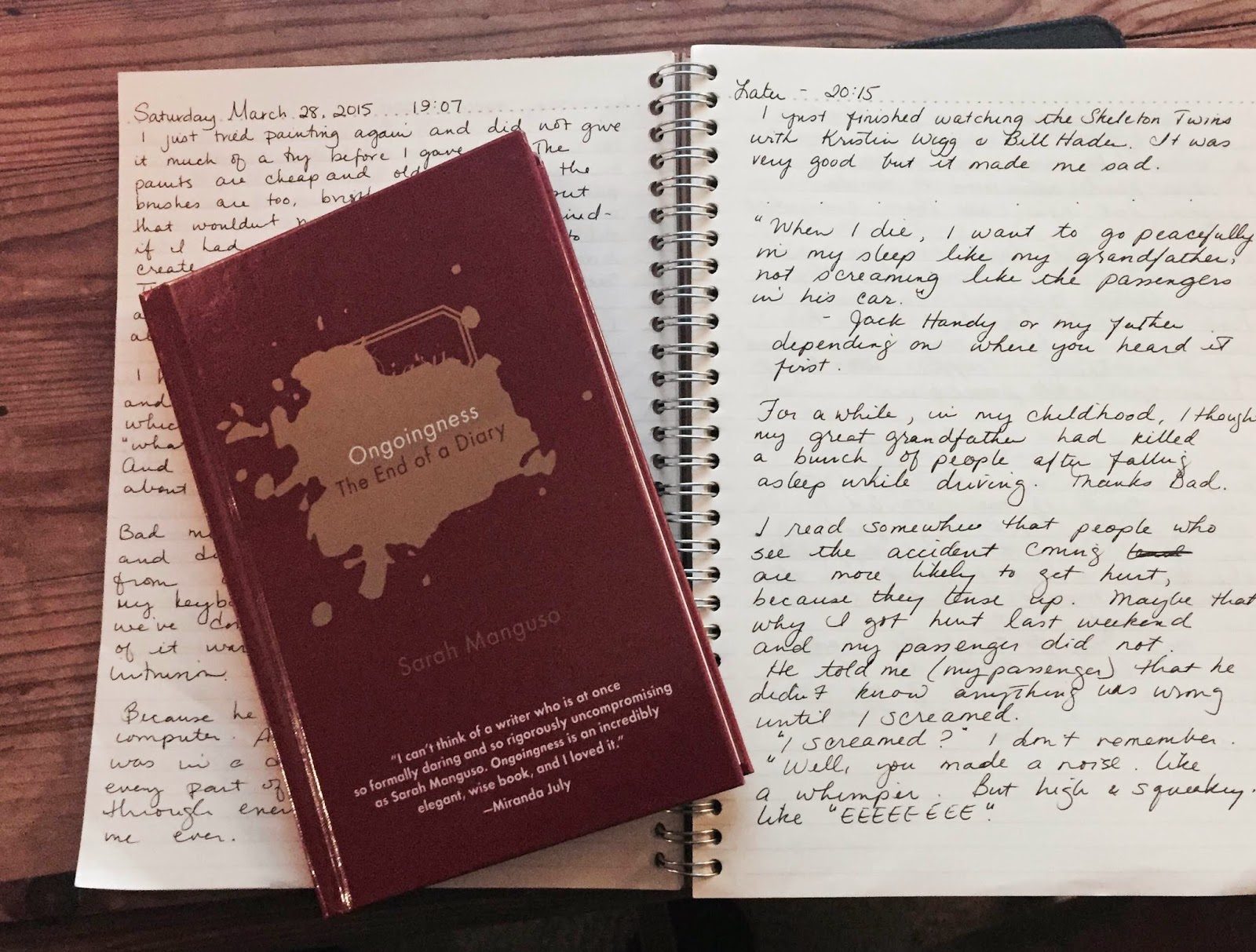